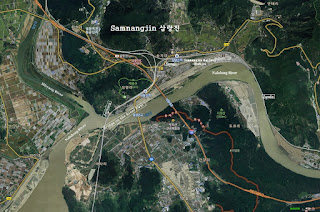 A little town named Samnangjin 삼랑진 is around the confluence of two rivers,  the Nakdong river 낙동강 and the Miryang river 밀양강. Samnangjin means a river dock where choppy water fed by three tributaries flows over the surface. Since Shilla dynasty(57~935 AD), a river dock located here had actually played a principal role in water transportation route along the Nakdong river. It became later one of the biggest dock along the Nakdong river during Joseon Dynasty(1392~1910 AD) whose role had been more emphasized as a collecting center for taxes, and it had a prosperous period in its history. The tax was usually paid in grain, cotton cloth and coin. In 1765, a tax warehouse named Jochang 조창 was opened on the riverside at the confluence to store the collected taxes from 6 regions including Miryang, Gimhae 김해, and Hyeonpung 현풍. Jochang refers to a warehouse for taxes arrived by ships. This route was linked to Samunjin 사문진 and Gangchang 강창 river docks. 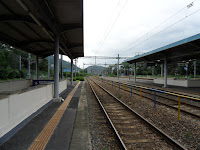 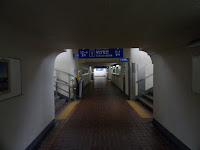 A railway station was opened 3 km inland northeast from Jochang in 1905. Since overland traffic was introduced, water transportation route had decayed. Jochang was closed, cherishing old memories and the town center was newly moved to Songji 송지 nearby where a railway station was built. However, Samnangjin had flourished again since the railway station became a junction which is connected to Seoul 서울, Busan 부산 and Masan 마산. 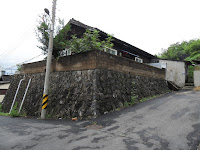 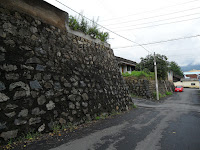 During the Japanese colonial period, Samnangjin railway station had a big official residence for railway workers, which still remains partly renovated on the gentle slope to the north of the station. The residence is on the unique wall made of stone and cement that can be easily found in the typical Japanese castle architecture. 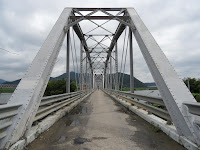 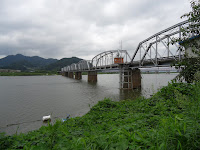 Meanwhile, since the first track had been partly relocated, the single-track bridge named Samnangjin bridge near Jochang was abandoned. Now it is still one-way car traffic or used by cyclists. It was nicknamed "Bridge on the River Kwai" in Thailand. Old rusty iron railway bridge is often called like that in Korea. 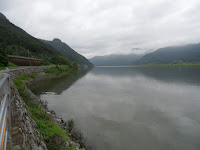 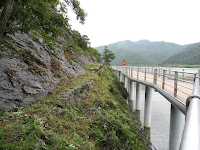 Samnangjin was also located on the key walking route to Seoul and Busan during Joseon Dynasty. The trail still remains partly on the steep mountain slope by Nakdong river, which is called Jando 잔도. There is a bike trail built right out over the water.
Posted by Jaeho at 10:58 AM

Jaeho
Daegu, South Korea
An ordinary man, living an ordinary life in South Korea. Glad to share the photos, sketches, and stories of life with others. The photos have been taken in Korea and Nepal and pen sketches were done in Korea, Nepal, India, and Thailand throughout the years.